SUPER SERIES TO CONCLUDE THIS WEEKEND IN 60 LAPPER 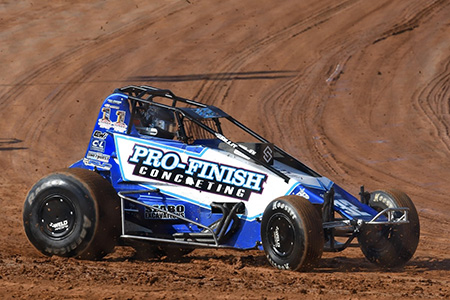 This weekend's Wingless Sprints 60 Lapper, which doubles as the final round of the ultra-competitive Wingless Sprint Super Series will conclude over 2 nights at Murray Machining and Sheds, Murray Bridge Speedway and has attracted an extremely healthy field of sixty-eight drivers from all over the country.

Drivers from Queensland, New South Wales, Victoria, South Australia, Western Australia and even America will battle it out on the 360 metre track, looking to score themselves a cool 10 thousand dollar pay day.

With two rounds already completed in Queensland and New South Wales, Dayn Bentvelzen currently leads the overall point score by just 10 points over Victorian Luke Weel. The Warrnambool based driver finished third at last weekend’s Australian Wingless Sprint Championship in Kalgoorlie and won the Des Nash Memorial at the Perth Motorplex the week before, so will go into this weekend as one to watch.

Portland based brothers Luke and Daniel Storer have figured prominently on the west coast in recent weeks, with Luke winning the Preliminary A-Main and leading the first three quarters of the Australian Wingless Sprint Championship last weekend.

Casey and Cody O’Connell are another set of brothers who will make the big trip from Queensland to be in the field in Murray Bridge this weekend. The pair are currently seventh and eighth in the Wingless Sprint Super Series points and will no doubt be hoping to move further up the standings in South Australia.

Pennsylvanian, Alex Bright is fresh off a second place finish in the Australian Speedcar Championship at Premier Speedway, Warrnambool last weekend and will drive for Brett Ireland in the sixty lapper Wingless Sprint event in Murray Bridge. The American is no stranger to Australian soils driving a Speedcar, but seeing his race in a Wingless Sprint will be worth the price of admission alone.

Jack McCarthy is one of the inform drivers on South Australian soil, winning the last round of the SA State Series, defeating Joel Heinrich, Keke Falland and Jake Ashworth in Waikerie in mid-February. All four drivers will be in this weekend’s field and look to continue their good form.

Matthew Iwanow, Tyson Bryden and Ash Hounsfield of Western Australia are all entered after continuing along from Kalgoorlie last weekend. The trio will be making the most of the opportunity to race against such an extensive field of drivers, after mixed results in the Australian Championship last weekend.

If you cannot be trackside, the event will be available to watch via Clay Per View in the comfort of your living room around Australia and the world.

Tickets at the gate or online from www.speedwaytickets.com.au
Kids 12 & Under FREE!