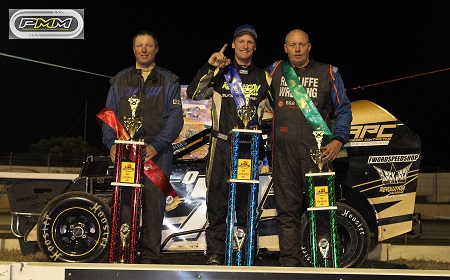 Queensland’s domination of the Australian Modlite Championship continued on Saturday night at the Murray Machining and Sheds Murray Bridge as Sam Gollschewsky claimed his first National crown. In fact, Queenslanders locked out the top four positions in the 25 lap Championship finale as former National Champion Terry Leerentveld, Sean Rose and Dan Lewis completed the top four with Scott Webb being the best of the locals in fifth.

After starting on the pole Gollschewsky would officially lead every lap and would hold off a late charge from Leerentveld following a late race caution. Leerentveld would throw everything at the leader in the final turn but he came up .182 of a second short of claiming a third National Title.

Patrick Hewitt had a solid night as he finished sixth ahead of Anthony Grillett, Brian Chadwick, Jacob Carlier and Justin Chadwick. Shane Price finished just outside the top 10 ahead of Luke Fraser, Jake Armstrong, Dylan Richter and Andrew Launer.

The race would see a number of cautions with the biggest moment of the race coming on lap 11 when defending race champion Kyle Honour, who was running a lowly 15th spun in turn two and was collected by second placed Ryan Alexander, who was attempting to lap Honour at the time. As a result, Alexander’s #28 suffered a right front puncture putting an end to his run.

It wasn’t a great night for the MA Motorsport Team as fellow South Australian hope Michael Miller didn’t start the Main event having blown the engine in the #3 entry during the third round of heats. Paige Charlson and Queenslander Scott Lehfeldt also failed to start the finale.

The night included plenty of racing for the scaled down modifieds with 12 heat races prior to the Gunspray and GIPS Pipes supported Championship decider. A total of 23 drivers fronted for action on the night due to the unfortunate omission of Klinton Hancey, who damaged his motor at practice on Friday afternoon.

The opening round of heats saw victories to Dane Lewis, Michael Miller and Sam Gollschewsky while Jacob Carlier, Scott Webb and Miller claimed heat wins in round 2. Ryan Alexander, Gollschewsky and Anthony Grillett greeted the chequered flag first in round 3 while Luke Fraser, Alexander and Gollschewsky rounded out the final round with heat wins.

The night also included events for Street Stocks, Junior Sedans and Late Models with Nathan Thorne defeating Sam Brumfield and Nigel Reichstein in the Street Stock finale while Aaron Tranter was a class above the field as he won the Junior Sedan feature. Four Late Models fronted for racing including Lee Rothe who was making his debut in the “General Lee” themed Chevrolet. After 15 laps it was Tasmanian Tim Pyke who won easily ahead of Brad Gartner and Jason Robinson.