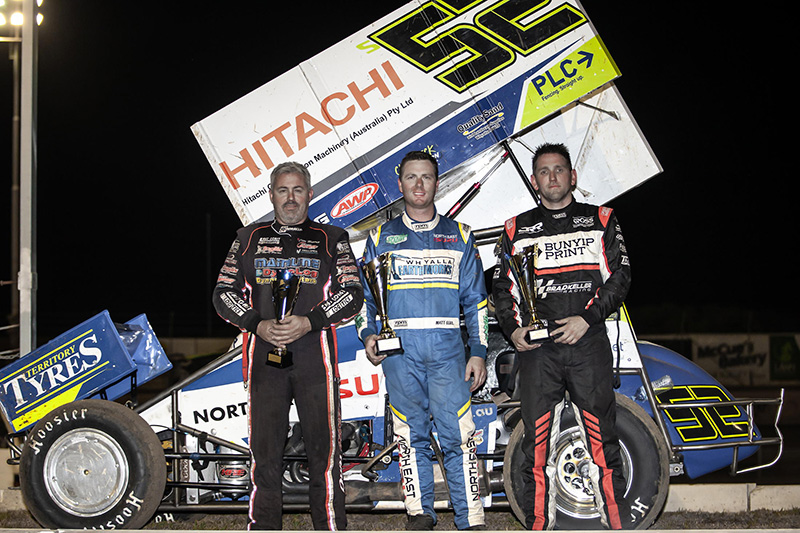 Saturday night’s Ross Wright Sprintcar Memorial at the Murray Machining and Sheds Murray Bridge Speedway was totally dominated by Matt Egel as he led all 30 laps of the caution filled A-Main to claim his third victory of the South Australian Sprintcar season. After qualifying on the pole Egel defeated fellow front row starter Brad Keller with Victorian Dave Murcott salvaging a podium finish after starting from position six.

The feature event saw 17 cars line-up with Austin McDonald being a non-starter after a wicked crash in heat three after he rode the right rear of Max Vidau entering turn three. The contact sent the #85 straight into the concrete wall heavily damaging the chassis.

From the drop of the green Egel was the class of the field as he ran the top groove in impressive fashion for the duration of the event and he never looked threatened despite several restarts. After dropping back to fourth early in the stages of the race Keller was reinstated to second following an incident between Brock Hallett and Jessie Attard as they made contact in turn two with both cars being locked together as they spun to halt on the back straight. At the time they were racing for the runner-up position.

The feature event also saw a further two major incidents as Daniel Pestka hit the turn four wall flipping hard in front of the Ros Wright Function Centre with the crash also taking out Ben Morris as he was left with no where to go. For Morris it ended a great night for the teenager who has earlier won a heat and stated on the second row for the main event.

Five laps later (lap 14) a similar incident occurred as Lisa Walker tagged the wall in an identical fashion rolling out of the event with Lachlan McDonough also tipping over as he attempted to avoid the carnage.

Rookie Max Vidau would also bring the caution out with five laps remaining after he spun in turn four setting up a five-lap sprint to the end but they couldn’t do anything about Egel as he stretched his lead to over 2 seconds to defeat Keller and Murcott. Joel Heinrich used the late caution to his advantage as he charged past three cars as he utilised the bottom groove to finish fourth while Ryan Jones finished fifth after failing to turn a lap prior to the final due to a fuel pump issue.

Brad Evans took out the Feature event in the Wingless Sprints with Brett Ireland 2nd and Anthony Tapley 3rd, while Jason Robinson (Late Models) and Brendan Zadow (Formula 500s) took out the feature events in their respective divisions.

The Murray Bridge Speedway's next event is this Saturday night - March 13th, with the running of the South Australian Formula 500s Title, with an expected line-up of 20+ cars. All Classic Speedway Cars will also be on track in a series of demonstration events, while Street Stocks complete the program. Tickets will be available online only from www.speedwaytickets.com.au