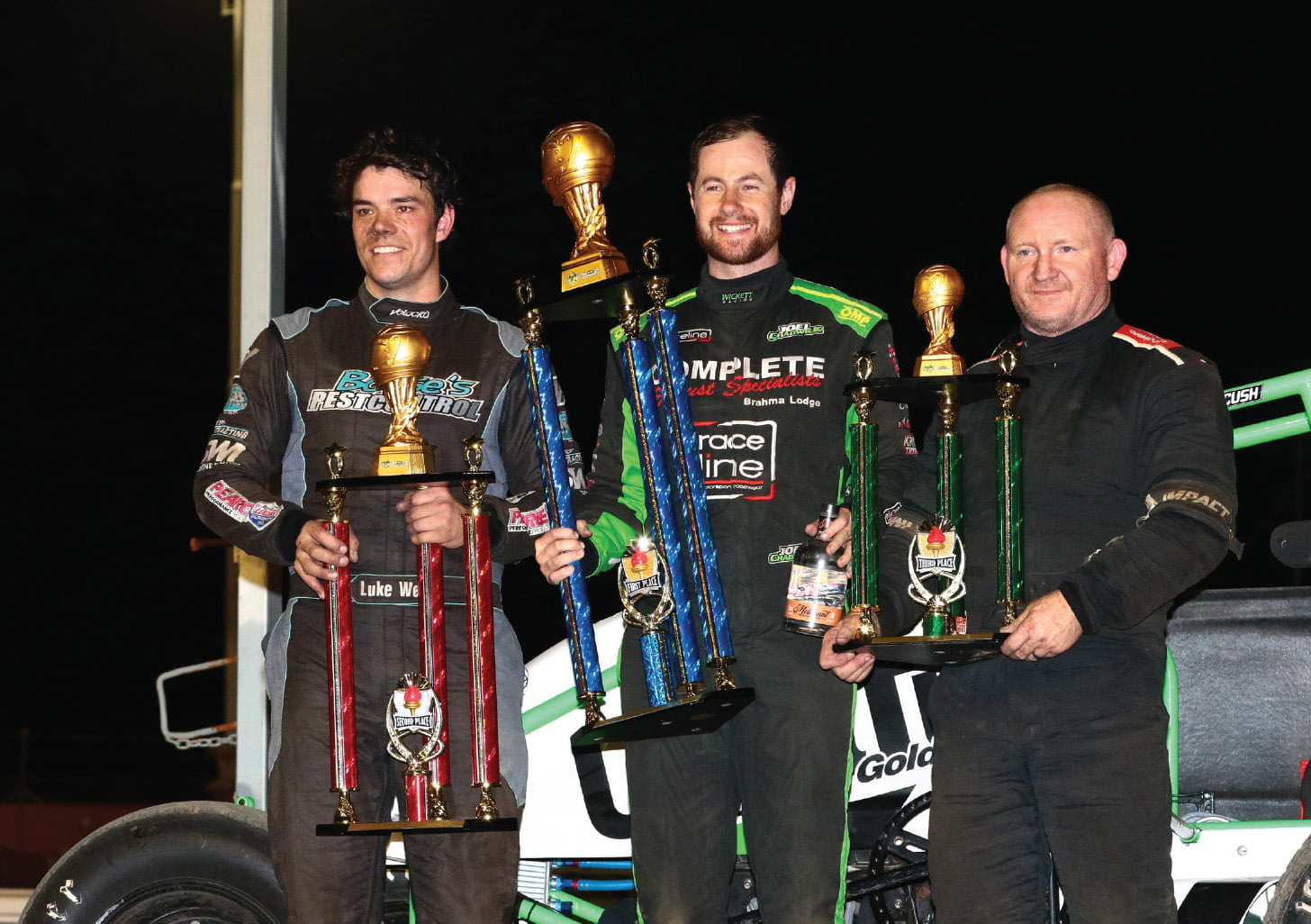 For the second week in a row Joel Chadwick has driven his race car onto the winner’s podium at the Murray Machining and Sheds Murray Bridge Speedway after surviving the longest race of the South Australian Wingless Sprint season. After starting from position 12 in the 20-car line up, due to an incident in his second heat, Chadwick took over the lead on lap 48 and then paced the field for the remaining 12 laps to claim the 2nd Annual 60 Lapper.

“I can’t believe that we won for a second week in a row. Both weeks have been really tough. For a while there I was riding around, and I could see Mark (Blyton) and Mitch (Broome), and I was thinking that Alex (Ross) must have been up there somewhere, but I couldn’t see him. Luckily, I missed the crash in turn 1 and then I saw Alex pull off, I really feel for those guys, but you have got to be there at the end” added the recently crowned South Australian Champion.

“I knew the track was going to take rubber but I had a pretty soft tyre on so I had to run the top for as long as I could to save the tyre but when the lapped cars starting to race me on the bottom, I knew the rubber was there, so I went to the bottom and finished the job”.
Second place went to Victorian Luke Weel with Dubbo’s Mark Blyton fighting back to third after being involved in an incident with a lapped car, that also involved Mitch Broome, just past the opening third of the race. At the time Blyton and Broome were battling for a podium position. Blyton’s impressive run to the podium was highlighted with a barnstorming run on the bottom of the racetrack as the #N5 really hooked up nicely on the black groove.

The major story of the night was Victorian Alex Ross, who dominated the race for the opening 48 laps before a fuel leak doused him with fuel in the cock pit forcing him to retire. Up until that point he looked the likely winner after producing a stunning drive in the lapped traffic, and in the process, he opened a lead of over four seconds on Chadwick.

The B-Main proved to be one of the races of the night with Jack McCarthy winning ahead of Geoff Cook, Tyson Martin and Jake Ashworth. The later just sneaking into the 60-lap final after passing rookie Melissa Crouch on the final corner and then winning the drag race to the line by less than a wheel length.

In the supporting divisions, Angelo Karoussis picked up the Feature win in the Formula 500s (State Series Rd 5) ahead of Brendan Zadow and rookie Jett Bell (Vic).

While Carey Weston made it two feature wins in a row at MMS in the Street Stocks with Nigel Reichstein in 2nd and Anthony Buchanan having a solid run for 3rd.

Sprintcar action is back at our next event this Saturday night, March 6 with the running of the annual Ross Wright Memorial. Late Models, Formula 500s, Wingless Sprints and Classic Super Modifieds round out the program. Tickets are on sale now via: www.speedwaytickets.com.au