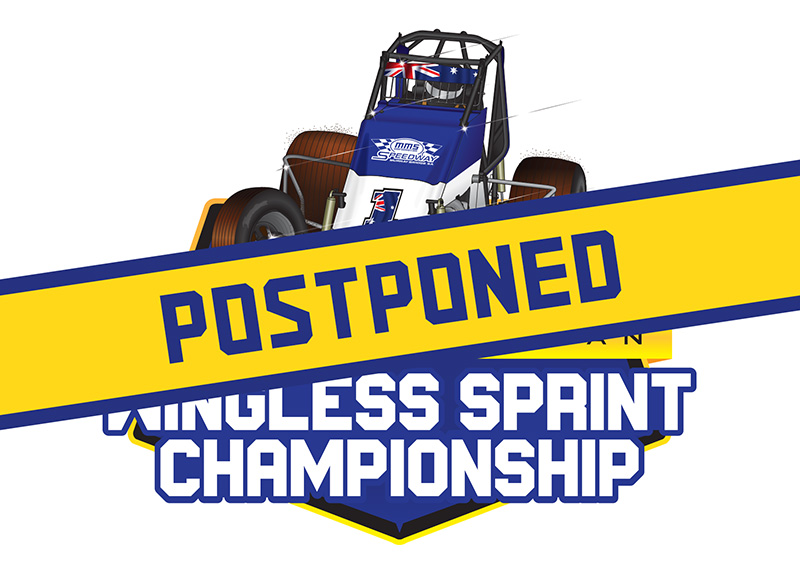 Following the border closure announcement as of midnight last night due to the recent Victorian Covid-19 outbreak, Murray Machining & Sheds Speedway Murray Bridge has revised it’s next three meetings scheduled from mid-February up until the March long weekend.

With the border closure affecting several teams and officials involved in the upcoming event, and uncertainty of when these restrictions may be lifted, the AWSR felt it had no choice but to postpone it's Australian Championship to be held at our venue on February 26th-27th - with every intention of running the event at a later date (to be advised).

“Murray Bridge Speedway has been pro-active in ensuring that our Speedway venue was open as soon as viable during the Covid-19 pandemic, and we have been fortunate enough to be able to run the majority of our race meetings that were scheduled this season in some format or another,” Venue Administrator Darren Shaddock said.
“We were fully committed to hosting the 3 Australian Championships (Wingless Sprints, 360 Sprintcars & Modlites) that our venue was fortunate enough to be awarded this season."

“But, we always knew that with the ongoing uncertainty surrounding the Covid-19 virus, that an outbreak may occur at any given time and there was always going to be a risk that any of the events may be postponed or cancelled, and unfortunately in this instance that is exactly what has happened."

The SA Wingless Sprint Title originally planned as a 2-night event for the 19th and 20th of February will still be going ahead, but has been reduced to a 1-night event only on Saturday, February 20th.

The Wingless Sprints 60 Lapper which was scheduled for the March long-weekend as part of the 60 4 60, now comes forward a weekend and replaces the postponed Australian Wingless Sprint Championship on Saturday, February 27th.

While the March long-weekend event will see the annual Ross Wright Memorial for Sprintcars run as a stand-alone race on Saturday, March 6th.

"While these changes are not ideal, we understand that many Wingless Sprint teams had already committed to running at our venue on these dates, and hope that they keep their plans in place as we would still love to see them here and still want to see as many cars out on the track as possible” Shaddock added.

Tickets for the SA Wingless Sprint Title will be available soon via www.speedwaytickets.com.au

Pending any further outbreaks/restrictions, the Australian 360 Sprintcar Championship, Australian Modlite Championship and the Demo Derby World Record Attempt will all still be going ahead as planned. Please visit the Murray Bridge Speedway website for our remaining race dates for the 2021 Season - http://www.murraybridgespeedway.com/schedule.asp