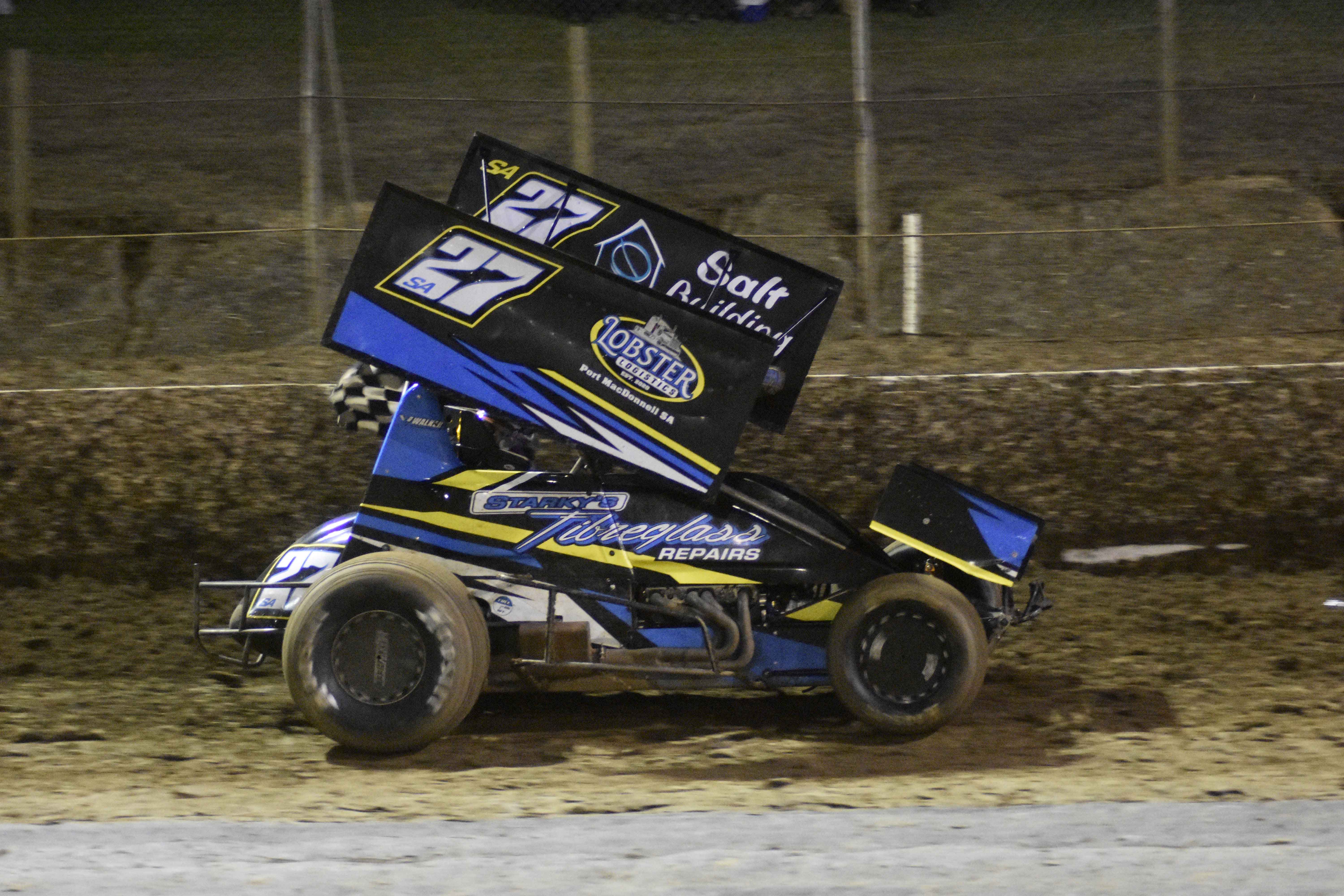 After a gruelling Sprintcars SA Speedweek, that saw events at Whyalla, Mount Gambier and Bordertown, the Final Round at the Murray Machining and Sheds Murray Bridge Speedway on Saturday night unfortunately saw only 9 cars front for action. Due to the low car count the format was changed at the pre-event Drivers Meeting with Track Management deciding to run two heats followed by twin 20-lap features.

Time Trials were also dropped therefore the heat line-up for the opening was decided with a pill draw with a complete invert for heat 2. The opening heat saw Daniel Pestka, who was only previous round winner in the field having won round 3 at Bordertown, utilising his pole start to win heat 1 ahead of Lisa Walker and Steven Caruso. The invert placed Mark Caruso on the front row of heat 2 and he raced away to win with Daniel Pestka and Steven Caruso following.
Therefore, Pestka would start on the front row of the opening 20 lap final with Mark Caruso, Steven Caruso, Lisa Walker, Max Vidau and Austin McDonald completing the first three rows. With the track conditions being extremely fast there was little passing as the race went flag to flag with Pestka setting a new track record, erasing the 18-year-old mark set by Darryl Downing. The time of 4:02.838 was almost 19 seconds faster than the time that was set on October 19, 2002.

Steven Caruso, Mark Caruso, Walker, Vidau and McDonald were the only other finishers.

Feature #2 would only see five cars complete the journey after Pestka spun in turn two on lap 2 and he was collected by McDonald and Mike Fox. Following the restart, the remaining 19 laps ran without caution as Steven Caruso defeated Adrian Cottrell, who led the race early before being passed in turn two, Mark Caruso, Max Vidau and Lisa Walker.

The fifth meeting of the season was held at the Murray Machining and Sheds, Murray Bridge Speedway on Saturday January 2, bringing in the new year.

Speedway Sedans were represented well, with 17 street stocks hitting the track along with junior sedans, who saw 14 cars on track.
Junior sedans saw their second meeting in a row with "Newstar" and "Topstar" groups being run, which has now seen many rookies claim their first victories on the speedway track.

The first on track were the junior sedan Newstar's for heat one, this saw Henry Brumfield get his first victory of his Speedway Sedans career, Ayden Powell was a close second after winning his first heat at the previous Boxing Day meeting.

Heat two of the Newstar group saw Riley Grieg also put a win to his name aboard the tidy Toyota Corolla.

The feature saw Henry Brumfield put in his best drive to claim a first feature win to match his earlier heat. Lachlan Brown aboard the #9 machine finished second after starting off the back row, Ayden Powell was third.

The Topstar field was full of usual suspects, including Nate Trewin, Drew Flatman, Kirra-Lee Pitcher, Aaron Tranter, Ky McEwin, Tyler Whitbourne and Corey and Max Richter. Their first heat saw a four second gap between first, second and third by the end of the heat when Drew Flatman crossed the line, Kirra-Lee Pitcher was second in front of Nate Trewin.

Aaron Tranter continued with his pace from early on in the season finishing second, Nate Trewin held onto third after having a huge bicycle moment in turns one and two mid race.

The Ford VS Holden battle continued as the street stocks had their fourth outing at the venue. This time however, they had to contend with one Mitsubishi. It all started in heat one with interstate visitor Scott Seacombe alongside Jemma Chapman for the start.

Seacombe looked comfortable in his first heat around the venue, taking the lead and putting plenty of space between him and second. This lasted until lap seven where Seacombe spun and found himself starting off the rear for the final restart.

Nathan Thorne led off the restart aboard the Mitsubishi Magna and won the heat when it was declared on lap eight due to Seacombe and Chapman coming together, Seacombe would be out for the rest of the evening.

Anthony and Moss Buchanan finished second and third. Heat two saw Nigel Reichstein take the win, ahead of Carey Weston and Craig Buchanan in third aboard his XF Falcon. Heat three saw Sam Brumfield looking best on track, he was leading in the latter stages until withdrawing with mechanical issues for the second time of the night.

Nathan Thorne took the lead and claimed his second heat win of the night. Carey Weston and Nigel Reichstein rounded out the top three.
The feature was a 20 lap journey. TF Magna and FG Falcon off the front row, Anthony Buchanan aboard the VY-VZ Commodore starting out of fourth.

The feature begun but not for long as turn one claimed more victims for the night, Anthony Buchanan spun, cars went left, right and unfortunately centre as son, Ryan Buchanan, had no where to go, resulting in a heavy impact putting both cars out.

The restart saw a run of 4 laps until Chapman spun in turn one, Jake Hamilton and Craig Buchanan this time having no where to go resulting in the XF Falcon heading to the infield.

The final sixteen laps saw side by side racing, with the field splitting into two battle packs early on. Nathan Thorne however, would go on to get his maiden feature win aboard the Mitsubishi Magna ahead of Nigel Reichstein second, Carey Weston third, Daniel Karpinski fourth and Jamie Owens Fifth.