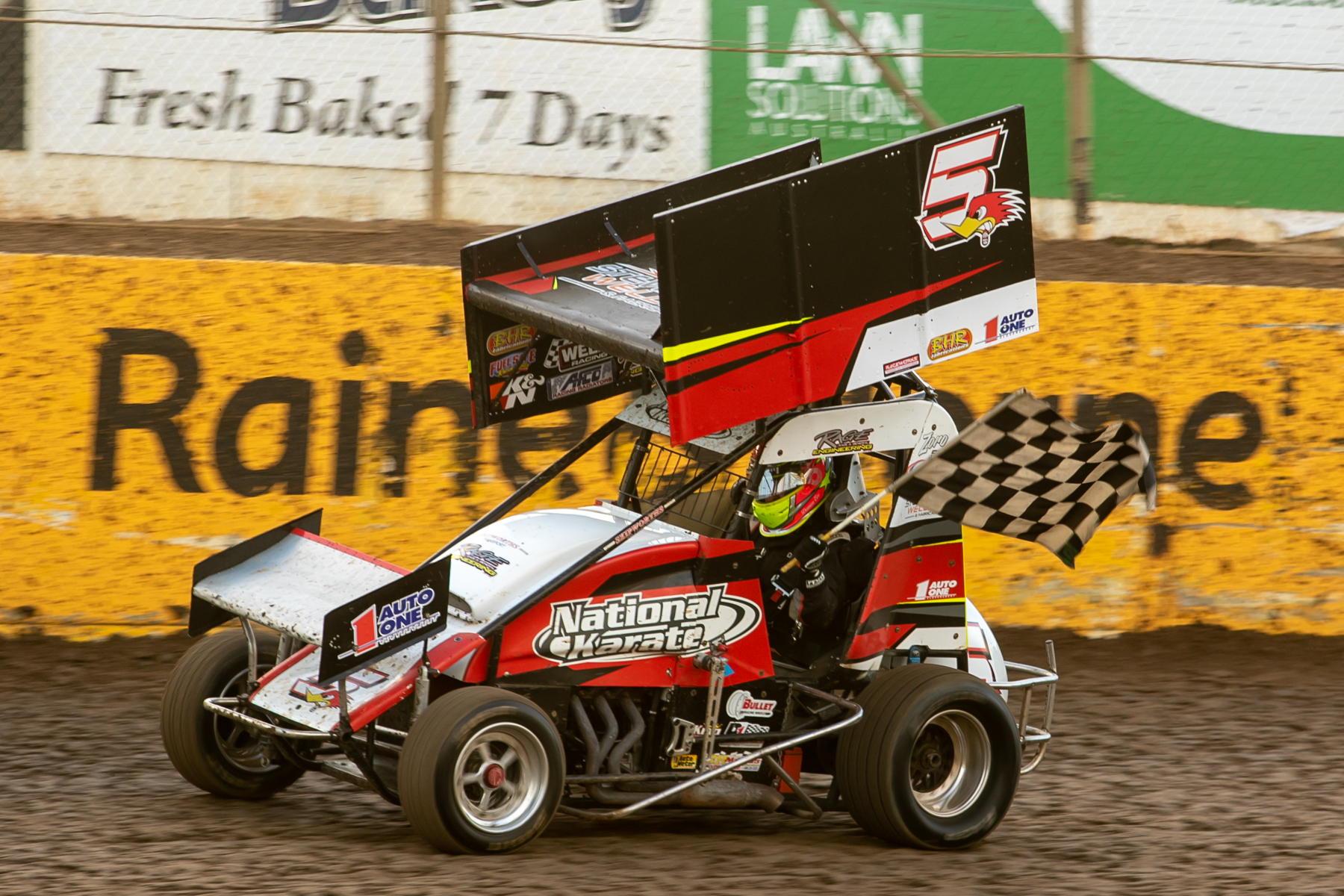 In addition to the Sprintcar Country Tri-Series, last Saturday night’s event at the Murray Machining and Sheds Murray Bridge Speedway included a further 9 racing categories, with a further 100 plus entries, with the main feature events being the Zeke Agars Classic for the V6 Sprints, Round 2 of the Formula 500 State Series and the second round of the State Modified Sedan Series.

The V6 Sprint event attracted a quality field with veteran Damian Eve finally breaking through for a major V6 Sprint victory as he claimed the Zeke Agars Classic. In the early stages of the 15-lap final Eve fell back as far as fourth before charging to the front on lap 5 passing pre-event favourite Nick Hall, who would hang onto second ahead of Darryl Barkla. Archie Fabian and Chris James completed the top five. Earlier the heat wins went to Eve and Hall.

The Formula 500 State Series round saw a dominant win by South Australian Champion Angelo Karoussis, who led all the way defeating Josh Munn and an impressive Dean Cottrell. Richard Schmidt got the better of Brendan Zadow in what was a great battle, while Ben Cooper, Nathan O’Shae, Corey Jones, Ryan Harry and Simon Reichelt completed the top 10.

Round 2 of the State Modified Sedan Series saw a small field of competitors front for the return of the class to the venue with Terry Brown using his previous track experience to easily claim the final ahead of Robert Uren, Tony Hardy, Ben Whitehead and Justin Demaine. Prior to the final two heats were run with Justin Demaine and Terry Brown winning a heat each.

A total of 21 Wingless Sprints fronted for action and at the end of the night Mount Gambier’s Mitch Broome added his name to the 2020/21 season winners list as he defeated fellow South-East resident Kirby Hillyer in the 20-lap final. Third place went to Hayden Vickers while early race leader Joel Chadwick faded back to finish fourth. Bronson Mauro enjoyed a great run to round out the top 5. Heat winners included Robert Heard, Hayden Vickers, Joel Chadwick and Kirby Hillyer.

The next event at the Murray Machining and Sheds Murray Bridge Speedway will be on Boxing Night (December 26, 2020) with the program including Wingless Sprints, Modlites, Junior Sedans and a crowd-pleasing Demolition Derby. This meeting will be followed by events on January 2 & 23, 2021.