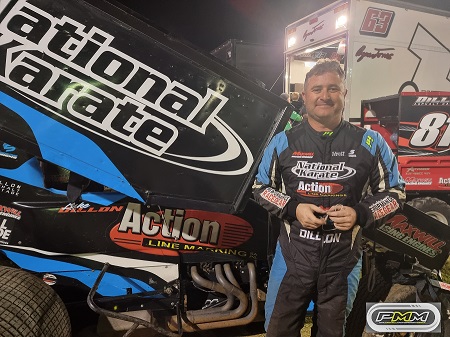 A Happy Luke Dillon following his A-Main win (Phil Michell Photo)
A late decision to contest the final Sprintcars SA Club show of the season at the Murray Machining and Sheds Murray Bridge Speedway paid off for Luke Dillon as he led all 30 laps in the non-stop main event after starting from the pole. In only his second start of the season Dillon dominated the night’s action as he set the quickest lap in qualifying (11.259 seconds) before winning his opening heat. The only time that the #81 Action Line Marking Triple X wasn’t up front was in heat 3, where he recorded a third placed finish.

Unfortunately, only 12 cars fronted for the final race of the 2020/21 South Australian Sprintcar season but the drivers still put on a good show on what was a cold evening, that also saw several rain showers sweep across the venue.

After spending much of the race in third local hero Ryan Jones got the better of Daniel Pestka, who lined up on the front row alongside Dillon, to claim the runner-up spot ahead of Pestka making it a Triple X sweep of the podium. Steven Caruso and Jessie Attard, who once again travelled from Sydney to race with the locals in South Australia, rounded out the top five.

After a tough run in the heats, having missed the heat invert, Lisa Walker salvaged a sixth placed finish ahead of Max Vidau, Lachlan McDonough and rookie Brent Fox. Three cars failed to finish including Ben Morris, who was running strongly inside the top five until his left rear tyre exploded while Joel Heinrich was another to encounter a tyre issue as he right rear went flat after it was cut by debris. Rookie Daniel Puddy didn’t complete a lap after slamming the turn three wall.

Earlier the opening round of heats were secured by Dillon and Pestka while the Jones and Attard were successful in round 2.

A small field of Street Stocks also took to the track, along with several classic speedway classes, with veteran Carey Weston defeating Nigel Reichstein and Craig Buchanan in what was more of a test session in preparation for the MJS Street Stock Series round at Murray Bridge this Saturday Night (April 17).

Release By Phil Michell For MMS